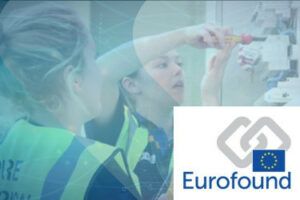 A recent research report on the Irish apprenticeship system by Eurofound (European Foundation for the Improvement of Living and Working Conditions), has found that whilst the system has improved and offers high quality apprenticeship programmes, there are a number of issues that need addressing to further improve the sector. The Apprenticeship Council and SOLAS receives praise for streamlining the process involved in bringing new apprenticeships into circulation other areas for praise included a solid curriculum, good training materials and a high level of cooperation between the trainers in the FET institution and the in-company mentor.

The report highlights a number of challenges, among these the challenge of maintaining a healthy economy (the last recession saw the introduction of the ‘Redundant Apprentice Placement Scheme’ to handle the large numbers of apprentices who no longer had sponsors). Another challenge being cultural opinions relating to apprenticeship training – “Ireland as in many other countries, is socio-cultural. For many young people apprenticeship is not an attractive proposition. They may be put off by the working conditions, for example long unsocial hours. They may aspire to a university education, as do their parents on their behalf, and so they are generally not interested in taking up an apprenticeship, particularly as the lack of permeability between apprenticeship training and tertiary education makes onward progression difficult, or impossible. Some of the submissions to the Review of Apprenticeship Training in Ireland indicated that ‘unless there was transparency about entry entitlements and progression routes, the attractiveness and public perception of apprenticeships as a valued career pathway would not be improved’ (Department of Education and Skills, 2013b).”

The third challenge highlights the gender issue which it refers to as being  “specifically Irish and refers to the limited choice of apprenticeship occupations, and more specifically the 25 designated craft apprenticeships in the construction, electrical, engineering and motor trades. This has meant that in these traditionally ‘male dominated’ occupations young women have been more or less excluded from apprenticeship training”.

This gender imbalance is referred to in the report as a ‘glaring weakness’ and other measures are recommended to improve this beyond the grant of €2,667 for each female apprentice recruited to a designated craft apprenticeship.

This website uses cookies to improve your experience while you navigate through the website. Out of these, the cookies that are categorized as necessary are stored on your browser as they are essential for the working of basic functionalities of the website. We also use third-party cookies that help us analyze and understand how you use this website. These cookies will be stored in your browser only with your consent. You also have the option to opt-out of these cookies. But opting out of some of these cookies may affect your browsing experience.
Necessary Always Enabled

Any cookies that may not be particularly necessary for the website to function and is used specifically to collect user personal data via analytics, ads, other embedded contents are termed as non-necessary cookies. It is mandatory to procure user consent prior to running these cookies on your website.