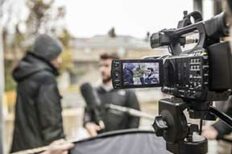 This QQI level 5 course is designed to teach participants the foundations of Television and Digital Film Production. Students acquire skills in Television Studio Production, single Camera Production, non-linear Film and Video Editing, while gaining knowledge of how the relationships between producer, advertiser and audience impact on one another through media analysis.

Many students look upon this course as a good introduction to Film and Television production as they produce a portfolio of work demonstrating technical competence and the skills required for effective television and digital film production.

The course can also be used as an excellent foundation for developing portfolios for Degrees in IADT, Tallaght IT, Dundalk IT, DIT, Maynooth and other Universities.

Distance Learning and Online Courses are offered in a number of different formats, these include correspondence courses (by post), online via computer or a combination of online and classroom instruction (blended learning).. View Online Course Feature >

Continuous Professional Development (CPD) helps to keep skills and knowledge up to date and ensures the standard of registrations & qualifications are maintained.. View CPD Feature >

Evening courses and part time learning options are a great way to enhance a CV, to socialise and make friends, as well as learn something completely new. There are an abundance of night courses and evening classes available.. View Evening Course Feature >