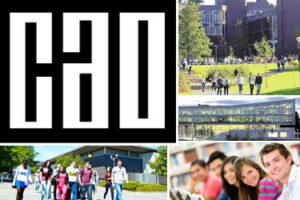 The Central Applications Office (CAO) is the organisation responsible for overseeing undergraduate applications to colleges and universities in Ireland.

The CAO awards points to students based on their achievements in the Leaving Certificate examination. A student’s points are calculated according to these tables, counting their best six subjects only (resulting in a maximum score of 625 points since 2012 with the introduction of the extra 25 points awarded to those who sit the honours mathematics exam and pass). If a student has sat the Leaving Certificate examination on more than one occasion, their points are calculated according to their best year’s performance. Students’ points are used as a queuing system for over-subscribed courses, with the available places offered to those students ranked highest by the points scale.

More information about the CAO can be viewed on their website – www.cao.ie

Distance Learning and Online Courses are offered in a number of different formats, these include correspondence courses (by post), online via computer or a combination of online and classroom instruction (blended learning).. View Online Course Feature >

Continuous Professional Development (CPD) helps to keep skills and knowledge up to date and ensures the standard of registrations & qualifications are maintained.. View CPD Feature >

Evening courses and part time learning options are a great way to enhance a CV, to socialise and make friends, as well as learn something completely new. There are an abundance of night courses and evening classes available.. View Evening Course Feature >

Ireland is now in Phase 3 of the government’s road-map for reopening society and business. Most businesses, services and cultural activities have now re-opened. You are now also allowed to travel throughout the country. With the reopening of society, it is important to remember that Covid-19 is a highly infectious disease. Physical distancing, hand hygiene and other protective measures should continue to be maintained at all times..
More Information