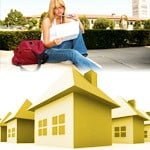 So the hard work is over, a difficult Leaving Cert year of study plans and stressful choices has paid off and a college placement awaits… well maybe not, for many students, there is still plenty to do before they can be assured of starting college this Autumn. The student housing crisis has become a popular news feature this time of year and is now worse than ever, with some of the more popular destinations charging exorbitant rates for student housing.

Dublin City University (DCU) is experiencing one of the worst years ever in terms of student accommodation. There the Students’ Union Vice President for Welfare, Domhnaill Harkin, described how it had been inundated with calls from students and parents searching for suitable housing. The union has had to ask staff of the university to consider renting out rooms to future students. While the college does have a number of on-campus accommodation options, these can only accommodate 1,100 students and with student numbers in excess of 10,000 there is lots of competition for the other available options.

With increased demand, landlords can increase rents and this is the scene in many of Ireland’s student hubs at the moment. An Irish independent survey of prices and availability found that rooms on offer close to colleges such as Trinity College ranged in price from €500 up to €2000 per month. Outside of the city centre this does fall a little but students can still be expecting to pay between €500 to €800 in the south of the city. The north of the city offers lowest rates at between €350 and €975. In Galway the survey showed prices up to €560 and in Cork up to €575. The real challenge is finding decent quality housing for a good price, when housing shortages occur the standards tend to drop with many students having to settle for poor quality housing with hygiene, sanitation, heating or other issues.

There is also the problem of prejudice. Accurate or not, students have a reputation for a party lifestyle with many property owners unwilling to rent out rooms to college goers. Conor Clancy, Trinity College Students’ Union Welfare Officer described this issue as ‘discrimination’ saying that the issue has become endemic in recent years. Students have been sharing stories of unanswered calls and emails from prospective landlords who can afford to choose their tenants carefully due to the housing shortage. Many students face the prospect of lengthy commutes to their morning lectures as they are forced out of city centre locations to the suburbs.

So for those who may have got late offers or who have left it late in sourcing their accommodation for the year ahead it looks like slim pickings in the more sought after locations, some students will be sharing cramped conditions even resorting to sleeping on the sofa of a friends house until something more appealing arises. If the worst happens and nowhere is found then a deferral may be the only option, if this is the case be sure to contact the college and explain the situation and have it agreed in writing that a deferral has been arranged.

As the student housing crisis seems to be worsening year on year it would be hoped that the government will start taking a more pro-active role in finding a solution to the problem. A spokeswoman from the HEA has said that forthcoming HEA report would consider actions to support accommodation for students. Hopefully this report will lead to action and students will not have to face the housing crisis for years to come.