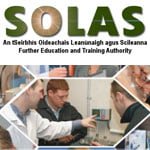 Earlier this year, Minister for Education, Ruairi Quinn, published a new bill stating that SOLAS, An tSeirbhís Oideachais Leanúnaigh agus Scileanna, will be the new education and training authority under the aegis of the Department of Education and Skills. This means that in Autumn of this year, FÁS will be dissolved and the FÁS training division will be transferred to the 16 ETBs (Education and Training Boards) that have recently replaced the 33 VECs. SOLAS also will be responsible for the commissioning and funding of these ETBs.

Speaking recently about the establishment of SOLAS, the Minister said, “I believe that SOLAS will bring a much needed focus to [the Further Education and Training sector] of our education system for the first time.” The Department of Education have said that SOLAS will play a key role in Ireland’s economic recovery through the establishment of a world class Further Education and Training system and that the unemployed, in particular the long-term unemployed, will be the priority group for support.

FÁS was set up in 1988 with the aim to assist those seeking employment. The authority runs a number of job centres, as well as apprenticeships and trainings all across Ireland, however it has faced much criticism over the years due to its cost and also the idea that it is simply a scheme to lower the country’s unemployment statistics. During the boom, it was spending a staggering €1 billion a year of taxpayer’s money and the controversy regarding this was brought to a head in 2008, when the Dáil Public accounts committee began an investigation into FÁS expenditure.

Unfortunately, even after all the money spent, the recruitment perspective of FÁS has not been a success. Statistics have shown that people who completed a FÁS training were less likely to get a job than those who had not. There has also been problems with the duplication of courses, within the PLC sector and between it and the FÁS training system.

At the moment there are 180,000 further education and 75,000 training places provided in FÁS training centres and, while there is the problem of duplication, there are some courses on offer that have been successful, such as personal training and access programmes to university. There are also some successful institutes, such as Ballyfermot College of Further Education, who are known internationally for the quality of their graduates. It will be important that these progressive and successful colleges are supported within the new framework of SOLAS and ETBs.

There will be pressure on SOLAS and the ETBs to make things work. It is more important than ever before that the further education system provides training for the right kind of jobs, as much of Ireland’s current unemployment crisis is due to a lack of qualified workers in key areas with specific skills.

There have been some suggestions in the Irish Independent regarding improvements needed, such as the need to restructure the lengthy and expensive apprenticeship programmes provided by FÁS. In 2008, when the construction industry collapsed, FÁS provided its students, who were in the middle of their four year training, with funding to complete the rest of their apprenticeship in the UK. These students were brought to full qualification in just four months.

The Irish Independent also noted that some of the successful courses, in areas such as catering, were changed into degree programmes in Institutes of Technology and therefore created a shortage of staff in the restaurant and hotel industry and left students who could not meet the entry requirements for the degree courses, without an opportunity to train.