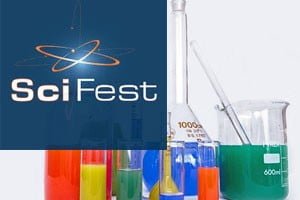 The SciFest programme consists of a series of one-day STEM (Science, Technology, Engineering and Maths) fairs for second-level students. The aim of the programme is to encourage an interest in, and love of, the STEM subjects. The programme is designed to be as inclusive and accessible as possible. The programme is implemented at four distinct levels.

Level 1. Local – [email protected]
[email protected] is where second-level schools host their own in-house SciFest STEM (Science, Technology, Engineering, Maths) fair. Support for the event is provided by SciFest in the form of a SciFest STEM Fair Toolkit, resources and BKMs on the SciFest website. Support for judging, certificates and a small number of prizes for participating students and promotional materials are also provided. This strand was introduced in 2011 and there has been strong demand from schools to participate. From just 5 schools in earlier years the number participating increased to 71 in recent times. In these 71 schools almost 7200 students presented just over 3000 projects.

Level 2. Regional – [email protected]
The Institutes of Technology, DCU and St Mary’s College, Derry host one-day SciFest STEM fairs which are open to all second-level students. A SciFest fair consists of a competition and exhibition of projects, a prize-giving ceremony, and may also include a selection of science talks, science demonstrations in the college laboratories and advice on careers in STEM and courses available in the college. [email protected] affords students the opportunity to visit a third-level college, view the facilities and get information on the various STEM courses available. The fact that the event is regionally based and has open and free entry means that SciFest is both accessible and inclusive. The project also has a cross-border aspect as St Mary’s College in Derry also hosts a SciFest fair and some students from schools in Northern Ireland cross the border to participate in fairs in the Republic.

Level 3. National – in Association with SFI
Winning projects from each [email protected] STEM fair are invited to participate in a national SciFest STEM fair. The projects are evaluated by an expert panel of judges from academia, enterprise and government. Each of the exhibitors is presented with an Excellence in STEM award in recognition of their success at the regional fairs and the overall winners receive an all-expenses-paid trip along with their teacher to represent Ireland at the Intel International Science and Engineering Fair (ISEF) which is held annually in May in the USA. The top five award winners of the Boston Scientific Medical Devices Award at the regional science fairs also participate in the national final.

Level 4. International – [email protected] and [email protected]
SciFest participated in the Intel ISEF for the first time in May 2012. ISEF is a one-week science fair, held annually in the USA since 1950, at which some 1800 students from over 420 affiliated science fairs in approximately 75 countries, regions and territories compete for a range of prizes. The projects are judged by a 1200-strong panel of highly-qualified judges. In the seven years in which SciFest has participated in Intel ISEF, students have won a total of nine major awards.

To view a calendar of events for SciFest 2019 view the following link – https://scifest.ie/Calendar