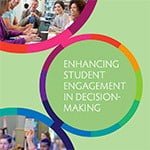 The launch of the National Student Engagement Programme was recently announced by Dr Padraig Walsh, CEO of Quality and Qualifications Ireland (QQI). In doing so, he highlighted the value it can represent for enhancing student involvement in higher education institutions.  Dr Walsh also identified the corresponding benefits for higher education institutions themselves: “it can equally build their capacity to facilitate high quality student engagement”.

The National Student Engagement Programme is commencing immediately with a pilot project. The participants in the pilot were selected following a Call for Proposals issued by the Union of Students in Ireland (USI), QQI and the Higher Education Authority (HEA). The aim of the pilot is to develop tools and resources that can be more widely applied to improve student engagement practices. The call was open to all higher education institutions with students’ unions (affiliated to USI or otherwise) and a relationship with QQI and/or the HEA. The successful institutions were, Cork Institute of Technology (CIT), Letterkenny Institute of Technology (LYIT), NUI Galway, the National College of Ireland (NCI) and Waterford Institute of Technology (WIT). The institutions will participate in the pilot in partnership with their students’ unions.

Dr Walsh underlined the importance of the collaborative approach taken to the project to date: “QQI and the USI have been working together on the development of the National Student Engagement Programme since 2015. The HEA is co-financing the initiative and will actively support its implementation. A working group will be established to oversee the pilot project and will of course include representation from the higher education institutions participating in the pilot project. In addition, the working group will include representation from the National Forum for the Enhancement of Teaching and Learning (NFETL) and the Project Manager of the Irish Survey of Student Engagement (ISSE)”. He also identified that the breadth of involvement in the project reflected the national interest in the topic and the enthusiasm for the developmental and concrete nature of the initiative.

The National Student Engagement Programme will be further and greatly supported by the appointment of a National Student Engagement Coordinator. Ms Cat O’Driscoll has now taken up this role and her previous experience as VP Academic Affairs & Quality Assurance of the USI is expected to be very beneficial to the project. In addition, Student Partnerships in Quality Scotland, sparqs, has been engaged to advise and assist on the development of the programme and Ms Eve Lewis, Director, has provided input to the programme’s design.

QQI and USI worked with the HEA and the higher education institutions and representative bodies in the development of the report Enhancing Student Engagement in Decision-Making which was launched by Tom Boland, CEO of the HEA, on 14 April. The National Student Engagement Programme is referenced within that report and Dr Walsh emphasised that its implementation will be directly informed by the principles for effective student engagement that the report is seeking to embed.