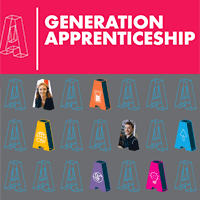 Generation Apprenticeship is a major expansion project to more than double the number of learners taking the apprenticeship route.

Proposals will be assessed during October 2017. Assessment will be completed by a subgroup of the Apprenticeship Council, overseen by an independent process auditor.

Following assessment and short-listing of the initial proposals it is planned that the assessment subgroup will engage with the short-listed proposers to gather further details including the developmental and operational funding sought for the apprenticeship.

Where similar proposals are received in the same or similar industry areas, the assessment subgroup may convene the groups involved, including industry representatives, to discuss the proposals and to explore whether the apprenticeship proposals should be configured differently.

The engagement process with the short-listed proposers will be completed before formal approval of proposals for apprenticeship development.

It is intended that the outcome of the process will be communicated to all parties by early November 2017.