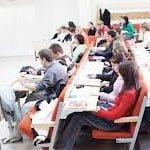 Minister for Education, Jan O’Sullivan has recently announced the most significant reform of Leaving Certificate grades and CAO points in more than two decades.
The main changes are:

The current 14 band ABC grading system will be reduced to eight broader bands, ranging form H1 to H8 at higher level and O1 to 08 at ordinary level.

Minister O’Sullivan commenting on the changes said, “These important reforms have emerged from a broad consultation process. They are intended to better serve students, to encourage them to be ambitious in their choices and reduce the high stress levels that are currently associated with the Leaving Certificate. The grading system of the Leaving Certificate has been left unchanged for more than two decades. The current system of 14 grades increases pressure on students. The majority of grades are separated by just 5%, resulting in students striving to gain minimal percentage increases to achieve higher grades. That will change for those students entering 5th year in September and sitting the Leaving Certificate in 2017”.

“Research shows that the current marking system is out of kilter with practice in other countries. For example A level exams in England, Wales and Northern Ireland use six grading bands, Scotland uses five grading bands and new Zealand has four.”

The reform of Leaving Certificate grades also requires a change to the CAO points system. A new common points system is currently being developed by the universities and institutes of technology and, following review by academic councils, will be published in September.  An example of its key features is being published today. The revised points system is designed to minimise random selection of places at third level and to encourage students to take-up high level course by reducing the risk of students at higher level gaining no CAO points.

The Minister said: “I would like to acknowledge the significant work that the university and institute of technology sector have dedicated to designing a new common points system.  The proposed system will minimise random selection for third level entry – an occurrence that is very frustrating for students and their families as they pin their hopes on each CAO round of offers. The proposed points system will also see students who take a higher level course receiving points for a mark between 30 and 39 on a paper. This is designed to encourage students to be ambitious and have confidence in taking a higher level paper. It will reward students who aim high and work hard.”

Minister O’Sullivan also welcomed the commitment of the higher education institutions to reduce the number of undergraduate courses, which will build on work already underway: “This is a very important area of reform for students. Too many entry routes into higher education programmes provide a bewildering array of choice for second level students in 6th year and many find this complexity very difficult to successfully navigate. Giving students the chance to experience a much broader 1st year and allowing them to defer specialisation to later in their degrees will give us more rounded graduates in the long term. This is good for them and good for wider society as well.”