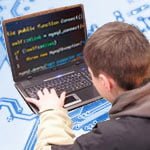 These days knowledge of computers is essential for many second level pupils making the transition to third level education. To date, there has not been adequate provision and there is a clear need for Computer Science and Computer studies within the second level junior and senior curriculum.

It appears that on the surface, this need is being addressed within the controversial Project Maths curriculum by introducing a new Applied Maths syllabus that will incorporate computer programming, vectors, matrices and calculus, subject matter that was originally dropped from higher level Maths. This new syllabus attempts to squeeze three subjects into one which may appease critics of Project Maths but in practical terms, more would be achieved by separating the subjects. This separation would allow access to individual subjects appropriate to the student needs and choice. Although Computer Science may be considered a maths subject, by including it within the highest level of maths will scare many students away.

Only 3% of leaving certificate students study Applied Maths and often this subject is taught off timetable. This new option by definition will exclude other students from pursuing study in Computer Science. This seems counter intuitive given it is by no means a forgone conclusion that a career in commercial computing needs a qualification in Applied Maths as many programmers and analysts can testify. While there is synergy between the subjects for future study in scientific computing, it is hard to see the benefit of squeezing Computer Science into just 46 hours of tuition.

There are many programming languages, different types of hardware and software used in a diverse range of applications across all industry sectors so unless standardised hardware, software are used and specific parameters for scientific or commercial programming it is hard to see how the Computer Science element can be assessed by teachers, some of whom may not have computing qualifications themselves.
It is a step forward for Project Maths but is still a token gesture given the issues surrounding this new Applied Maths syllabus.

Other Education Systems
Compared to other countries including the UK, Ireland has a way to go before students can join the global excitement of computing in school.
The international experience of Computer Science varies due to educational system diversity but many countries have inclusive Computer Science programmes in schools, with numerous schools starting at primary level.
For example, the UK aim for computing is to make sure students understand and apply basic concepts and principles of computer science, including logic, abstraction, data, and algorithms. Students are taught computational analysis to solve problems and have access to plenty of practical experience coding that they can translate into the real world. There is a new stand-alone GCSE that gets students working with the real world and understanding how technology works. The syllabus was developed with industry, teachers and the computer science industry and provides skills that employer’s desire.
The new GCSE examination also provides a clear pathway through to study at university via “A” levels.

There is a wealth of resources available to Irish educators to enhance the Computer Science experience for every student that will allow them progression to third level education via Junior cert and Leaving cert qualifications in the individual subject of Computer Science. While there may be difficulties in rolling out a Computer Science programme across schools in a meaningful way, and cost involved, there are economical ways for implementation. The use of open source software and Raspberry Pi computer has proven successful. The Raspberry Pi is a UK developed single board computer that is the size of a credit card. The Pi was developed expressly for the purpose of teaching basic Computer Science in schools.

Ireland is a country that embraces technology and is at the forefront of research and development across many industry sectors. It makes sense that a dedicated Computer Science pathway is available for students, especially as there are industry shortages for people with computing skill sets.