Apprenticeship Council to be Established 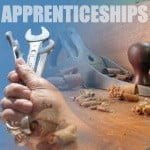 A new Apprenticeship Council has been announced which will develop the area of training and on the job experience.

An apprenticeship is the recognised training involved in becoming a craftsman in Ireland. Some of the main craft trades include mechanics, electrical, plastering, plumbing and carpentry. These trades have been designated by SOLAS and are within the scope of the Statutory Apprenticeship system.

Apprenticeships are demand driven educational and training programmes. Based in the classroom and the workplace, the programmes are aimed at developing the skills necessary for the needs of the labour market. Apprentices are paid an Industrial Apprentice Wage Rate, which may vary, depending on the employer and the occupation.

As well as this, the curricula for the current apprenticeships will be reviewed and five trades are currently being reviewed by SOLAS (Plumbing, Electrical, Carpentry and Joinery, Heavy Vehicle Mechanics and Metal Fabrication). Although this process has been slow, it is hoped that reviews for the remaining trades will be faster.