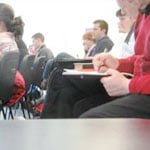 Recent figures released by the Teacher’s Union of Ireland (TUI) show that there has been a significant reduction in the number of lecturers in ITs while the number of students has increased. The union has expressed concern that the cutbacks are affecting the quality of student’s learning and is calling for investment in the sector to ensure that student’s needs are met.

Between 2008 and 2012 funding for ITs dropped by 22%. The number of students rose by over 17% during the same period and the number of lecturers fell by 8% due to the cutbacks. The General Secretary of the TUI, John McGabhann has expressed his concern over the cutbacks, saying that teaching and facilities such as laboratories are being put under pressure.

McGabhann stated that IT lecturers teach 18-20 hours per week, higher than the international average of 10-12, and that the addition of administrative responsibilities means there is less time for research, scholarships and other academic duties.  He also reinforced the important role of ITs as generators of business and how appropriate funding would help them to better meet the needs of the economy.

McGabhann said that it was “perverse and damaging” to be putting such a strain on teaching facilities in the current economic climate. With a record number of students applying for third level places through the CAO this year, there is no sign of student numbers decreasing and without financial support, ITs around the country will continue to struggle.